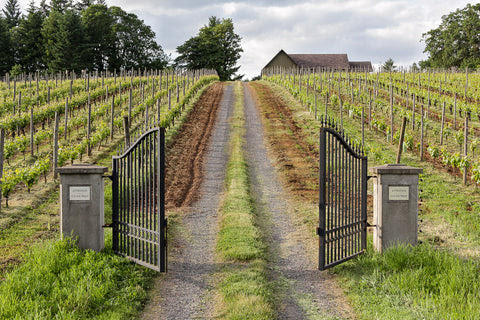 We weren't sure it was possible. Cameron has ascended to a new level this past year, with each and every wine they've released. Tasting the 2016 single vineyards yesterday offered conclusive proof.
One of the top 10 Pinot noirs of the 2016 vintage, a top Oregon Chardonnay for more vintages running than we can count, the best domestic Nebbiolo we've ever tasted -- all from the Cameron cellar.


If you have a Pinot noir and/or Chardonnay collection, the 2016 Cameron single vineyards are must-haves. (at right, the gates of Cameron's Clos Electrique)

$58.45 in any 12 bottle or Build a Case* order ($64.95 regular)
An awesome vintage for Abbey Ridge -- the best since 2008 and according to what we tasted yesterday, better. Wearing darker shades in 2016 but still undeniably elegant, the risque side of the aromas (you'll see) join those more easily put in print: crushed red berries, lavender and rosemary. Conveying power and structure through the lens of grace, and more bluntly being outrageously attractive, it catapults into my top 10 Pinot noirs of the 2016 vintage. A must-have. Utterly tempting to open a bottle now (go ahead, you have my full permission), in 2028, or any time in between. Abbey Ridge is a crown jewel of Willamette Valley vineyards -- nearly 40 year-old vines, high in the Dundee Hills, organically farmed. So distinctive and so damn good. - Marcus

$58.45 in any 12 bottle or Build a Case* order
($64.95 regular)
As always, this is its own beast. A complex melange of red fruits meets sandalwood, black tea, and a kiss of orange all woven together by ribbons of Clos Electrique's mouthwatering salinity and smoky minerals. With over fifteen clones of Pinot noir planted on a mere two acres, Clos Electrique is one of Oregon's most fascinating and electrifying (groan!) vineyards. If you find yourself with no other wine in the house, don't fret: this can be cracked in the next year and thoroughly enjoyed though it will rock your world after a handful of years in the cellar. Old World Pinot noir meets Oregon. - Marcus

Cameron Clos Electrique Blanc 2016
$58.45 in any 12 bottle or Build a Case* order ($64.95 regular)
I've tasted a boat load of Oregon Chardonnay and each vintage this is one of a literal handful of the top wines, period. Planted to rare clones of Chardonnay not typically found in Oregon and California, Clos Electrique delivers a laser of Chardonnay beauty with textural loveliness and a decade of aging potential. The '16 is particularly fresh and focused, and particularly exquisite. - Marcus


Perhaps you've heard my diatribe against domestic Nebbiolo: do it right or don't do it at all! Of course, team Cameron did it right and have been working on Willamette Valley Nebbiolo for the better part of two decades. Their determination has yielded a Nebbiolo that impressed even this most skeptical critic. Think the pretty side of Piedmont, and think delicious. Very Limited. - Marcus


We look forward to helping you with an order. Thanks for your support!