Optional button
Since its inception with the 2012 vintage, I've hounded Eyrie's second-generation winegrower, Jason Lett, about wanting to write a feature on his decision to bottle Eyrie's five single vineyard Pinot noirs separately. There were Original Vines releases, a couple vintages of Daphne, but nothing like the bottled history lesson that was launched with 2012. Despite my intense interest, I was thwarted by timing: the single vineyard wines were released at different times and we were never able to formulate a comparative, all-encompassing offering of all five wines. Until now. Having tasted the 2015 single vineyard Eyrie wines twice now, I cannot think of a better vintage with which to launch our offer.


The wines are simply fantastic. In each single vineyard Pinot noir, Jason has infused Eyrie's history and legacy with the energy and discovery of a young upstart winery. 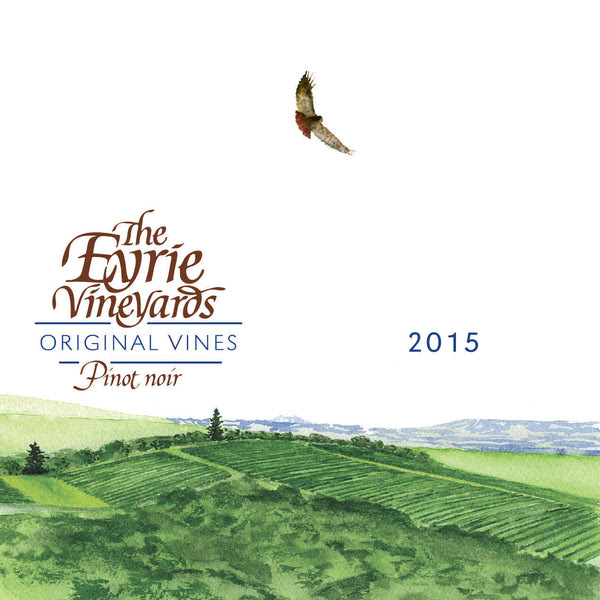 $299.95 (save 10%)
The 6-pack includes one bottle each of Eyrie's five single vineyard 2015 Pinot noirs (in order from highest to lowest elevation): Daphne, Roland Green, Original Vines, Outcrop, and Sisters plus one bottle of 2015 Eyrie Willamette Valley Pinot noir.
All of The Eyrie Vineyards are certified organic. Since their founding in 1965, Eyrie has not tilled, irrigated, sprayed pesticides or herbicides. Never. It wasn't "hip," it was what the Letts thought was the right thing to do. (Eat your heart out "natural" wine.)


Jason poured the wines for me in order of lowest to highest elevation vineyard, yet another aspect distinct to Eyrie that I've not experienced at a single other Oregon winery. When you open your 2015 Eyrie single vineyard Pinots for a comparative tasting, I recommend you do the same.


Each wine is made exactly the same way, entirely de-stemmed, fermented with wild yeasts, aged in exactly the same percentage of new oak (19%), bottled at the same time. It is 100% about the vineyard expression or as Jason says it, perhaps with a hint of defiance, "I want you to taste the difference in the site not what the winemaker thinks the site tastes like."
The wines:
Eyrie Daphne Vineyard Pinot noir 2015 $67.45 in any 12 bottle or Build a Case* order ($74.95 regular)
It's impossible to contain my enthusiasm for this wine and this vineyard. My first "ah-hah!" moment occurred with the 2009 Daphne (at the time, only the second bottling ever of a Daphne designate). After all other wines came and went, it was tied for my top wine of the entire vintage (Thomas '09 sharing the crown). Daphne Vineyard is the second oldest (planted in 1974) and highest elevation (890 feet) Eyrie vineyard. It is exposed, cold and windy, the soil is extremely shallow. The vines are almost bonsai-like and stripped of bark because of the harsh environment; the clusters they produce are tiny. The stressed conditions breed a unique and awesome wine. A glowing orb of energy, Daphne's brilliance radiates outward, packed with so much intensity of aroma and flavor that I don't know where to begin. Rose-accented red, blue, and purple tones, exotic spices, surprisingly overt and showy already, yet with a 15-20 year cellar life ahead of it. - Marcus
(Jason in Daphne Vineyard)
96+ points Wine Advocate
Eyrie Original Vines Pinot noir 2015

$67.45 in any 12 bottle or Build a Case* order ($74.95 regular)
This is it. The name says it all. It's impossible not to be overwhelmed by the historical significance of the site where Willamette Valley's first Pinot noir vines were planted, and then to be overwhelmed by the mesmerizing aromas, to smell elegance, undeniable sexiness wafting from the glass. Its movement through the tasting experience is what distinguishes Original Vines, with a truly symphonic ebb and flow, from piano to forte, leaving a haunting Pinot purity on the ultra-pretty finish. Planted in 1965(!), at an elevation of 260 to 410 feet, the soil and elevation are exactly the same as Outcrop, it is truly the sensing of vine age and its unparalleled pedigree. - Marcus
95+ points Wine Advocate
Eyrie Roland Green Vineyard Pinot noir 2015

$53.95 in any 12 bottle or Build a Case* order ($59.95 regular)
For all the love Jason professed to the other sites, it was at Roland Green that he fawned over the perfect nature of Pinot noir ripening here, the Goldilocks vineyard, "a near perfect site" as Eyrie states. As he explained, it's at this elevation that a conundrum happens -- the actual ripening of the grapes slows yet the wines can taste riper because of their darker nature. The tannins are slightly more pronounced (in an Eyrie way, meaning they are still silky), and there's gorgeous depth and refinement to every aspect of the wine. Planted in 1989, at 540 to 720 feet, named after David's father, Roland Green Lett. - Marcus
92 points Wine Advocate
Eyrie Outcrop Vineyard Pinot noir 2015 $44.95 in any 12 bottle or Build a Case* order ($49.95 regular)
To me, 2015 is a breakout vintage for this site. The sensual, musk-like perfume of its Original Vines neighbor is beginning to show itself, along with some spicier threads interwoven into the melange of Oregon summer berries, mostly fresh with a spoonful of the best berry jam you've ever had. Excellent purity and powder-fine structure. When I first tasted it, at the winery, Jason introduced it in a way that struck me as odd, even funny: "I like this wine because it helps set the stage for the next wine." Huh, I thought. Until walking the vineyards, when I realized the continuity between Outcrop and Original Vines -- they are mere steps from each other! Planted in 1982, with a complicated composition of soils, three volcanic and three sedimentary colliding. - Marcus
(Original Vines on the left, Outcrop on the right)
93 points Wine Advocate
Eyrie Sisters Vineyard Pinot noir 2015

$40.45 in any 12 bottle or Build a Case* order ($44.95 regular)
There's a purity to the fresh raspberry fruit, and with air Pinot's inner sweetness appears, as does great texture, warm soil tones, and a kiss of orange pekoe tea. A pleasure to drink! The lowest elevation site, 230 to 330 feet, planted in 1989, comprised of a mix of soils colliding. As Jason says, "here the site steps aside a little and lets the variety speak." - Marcus
93 points Wine Advocate

The Story
The importance of The Eyrie Vineyards (Eyrie) to the Willamette Valley's wine status, success, and culture cannot be overstated. Founder David Lett, Papa Pinot, was the first to plant Pinot noir in the Valley. It was an Eyrie Pinot noir that shocked the wine world in blind tastings, proving that world class Pinot noir could -- was -- being grown here.


But this is not a historical retrospective. Why did the most historically significant, the original Willamette Valley winery, make a profound change after nearly 50 years?


The answer is that it was time for Jason to make his own history.


Like a lot of kids who grow up in and around the family business, Jason wanted nothing to do with the wine industry when he was 18. "My dad had stopped being cool," he says with trademark wit, "and it wasn't until I was in my 20s when he started being cool again."


Jason transitioned to winemaker at Eyrie in 2005. He and his dad had only three years making wine together before David's passing. Among the legacy Jason inherited from his father was an extensive library of wine -- not a case or two from a few favorite vintages and bottlings, but a voluminous warehouse of vintages and varieties. "I really miss having my dad around to ask questions," Jason says, "but he left me a library which has to substitute for conversation and discussion. I'm still learning from him."


But he couldn't learn from what hadn't been made -- there were no notes and more importantly, no bottles. "My dad made seven wines; I make twenty-two, (interestingly, Eyrie makes 9000 cases today and made 9000 cases in 1991). I wanted to know how the different sites age in the cellar, I wanted to learn about our vineyards," Jason says, in a way that seems so matter of fact to him and so profound to me. Jason is bottling the future history of The Eyrie Vineyards.
We look forward to helping you with an order. Thanks for your support!
Marcus & Andy
Share Share on Facebook Tweet Tweet on Twitter Pin it Pin on Pinterest
Back to Offers